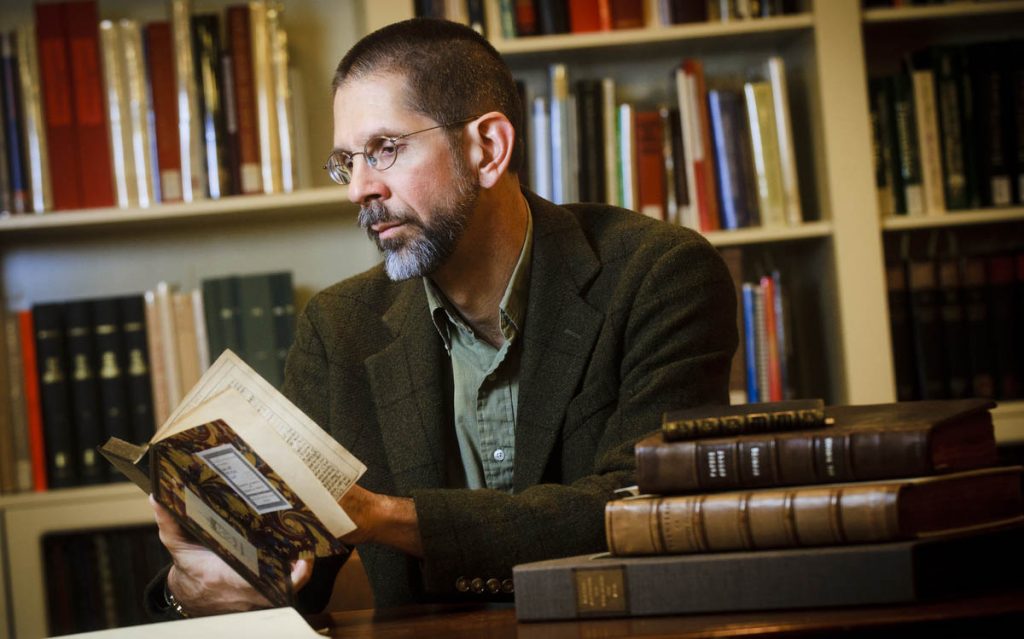 UNCG is pleased to announce that Christopher Hodgkins, Professor of Renaissance Literature and Atlantic World Studies and Director of the George Herbert Society, has been awarded a $300,000 Scholarly Editions and Translations Grant from the National Endowment for the Humanities. His fourth from the NEH, the award will finance production of the three-volume George Herbert: Complete Works (GHCW), now under contract with Oxford University Press. Hodgkins shares the award with his series co-editor Dr. Robert Whalen, Northern Michigan University; and with editors Dr. Paul Davis, University College London and Dr. Luke Roman, Memorial University of Newfoundland, St. Johns. This achievement is also UNCG’s, which not only serves as home to the George Herbert Society, but also, in our Walter Clinton Jackson Library, preserves one of the world’s largest collection of Herbert’s early books.

George Herbert (1593-1633)—a contemporary of William Shakespeare and King James I—was Public Orator at the University of Cambridge, member of Parliament, a priest in the Church of England, and, with his friend John Donne, a leading light of the seventeenth- century “metaphysical” poets. He is best known for his enduring work of devotional verse, The Temple, a collection of mainly short lyrics renowned for their simple freshness of phrase, their intricate interconnections, their splendid variety of form, and their intimate interior drama. As its title suggests, Complete Works comprehends the entirety of Herbert’s writings, including his eloquent Latin and Greek verse and epigrammatic prose, to which are added original translations by Dr. Sarah Kunjummen (University of Chicago) and the editors.

Edited texts are established through close examination of multiple “witnesses” to Herbert’s works—i.e. contemporary editions and surviving manuscripts, several of which have been recently discovered or identified after some four hundred years and will be included for the first time in the new edition. The other major component of GHCW is its extensive critical apparatus, largely Hodgkins’ work—i.e. a new brief biography along with detailed introductions and annotations pertaining to Herbert’s life and to his historical and intellectual contexts.
The finished product will appear in three print volumes as part of the Oxford Scholarly Editions series. In addition, the UNCG Libraries, in partnership with OUP and the George Herbert Society, will preserve and publish an expandable digital complement: high-resolution
images of all witnesses presented in parallel display, alongside transcriptions that capture the original spellings, abbreviations, and other features of early-modern books and manuscripts, including the peculiarities of scribal Neo-Latin. This searchable archive, to be based at
UNCG, preserves the whole of the Herbert corpus for future generations, and provides free public access to materials otherwise available only to those who are able to travel to the repositories that house them.

As the project’s co-editor, together with founding series editor Whalen, Hodgkins oversees an international team of textual scholars, literary critics, and Latinists, including a fourteen-member international board of expert advisors—all under the imprimatur of OUP,
the world’s leading publisher of scholarly editions. Now more than twenty years in the making, GHCW is a once-in-a-lifetime production, providing the foundation for critical study of this essential poet for generations to come.

A member of the UNCG faculty since 1991, Hodgkins is a grateful to the English Department, the College of Arts and Sciences, and University community, which have generously supported his work over the decades through multiple internal grants and awards, and especially through shared sponsorship of the George Herbert Society and UNCG’s membership in the Folger Institute of the Folger Shakespeare Library on Capitol
Hill—investments that have been crucial, he says, to the project’s success.